If the future of energy is electricity, who will own and control YOUR power?  Consumer-owned utilities (COUs) – where the ratepayers own the utility rather than corporate shareholders – have provided reliable electricity to U.S. customers since the 1890s. Today, about 2,900 “municipal” and  “cooperative” COUs serve 91 million Americans.  Some COUs are large, and others are small. Here in Maine, our 9 COUs serve 97 towns, charge their customers far less on average than Maine’s investor-owned utilities CMP and Versant, and provide far more reliable service.

COUs often outperform investor-owned utilities (IOUs) because of one essential difference: IOUs serve their shareholders while COUs serve their ratepayer/owners.

Click on each of the benefits listed below to learn more details about why COUs are a better choice for customers: 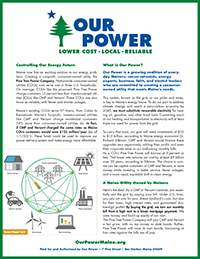 Read the Our Power Overview

All the essentials distilled into a handy printable 2-page PDF file. 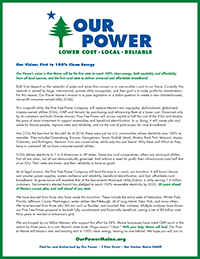 See how Maine can become the first state to reach 100% clean energy and the first rural state to deliver universal and affordable broadband.

Maine has a history of locally-owned electric, water and telephone utilities. Currently part or all of 97 of Maine’s 488 communities are served by consumer-owned electric utilities, or COUs: